Ever whip up a dish that’s so madly yummy you wanna feed it to everyone you’ve ever met? This is one of those.

Yup, Easter’s already hopped on by, but who says that’s the only ham-appropriate occasion? We’d unexpectedly received a smoked, bone-in ten-pounder as lagniappe for being loyal grocery store shoppers, and while we were old hands at prepping its hard, salty country cousin, we’d never actually baked and glazed a city ham. We’ve long been inspired by Aretha Franklin’s ginger ale doused Queen of Soul Ham and have heard tell of a Coca-Cola ham or two, though have never had the pleasure of sampling one. 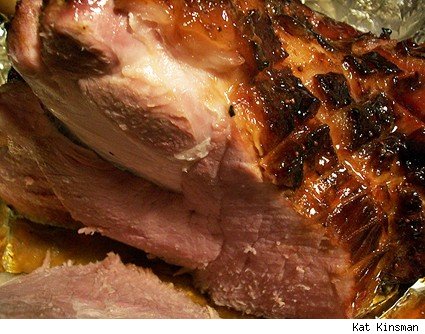 A tad loath to leave the house and brave the holiday supermarket fray, we took stock of what was on hand. Diet drinks weren’t gonna cut the mustard, husband would flip if we drained his precious Pepsi stash, tonic was a tad depressing, then lo and behold — Cheerwine! We’d hauled back cases of the distinctive cherry soda when last we hit the Tarheel State, and had been holding out for a special occasion to dip into the stash.
END_OF_DOCUMENT_TOKEN_TO_BE_REPLACED

I’m not gonna lie — I’m rough on my books. There’s a school of thought treating the physical manifestation of the written word as a sacred object, and I fully respect that. However I, for one, shove an old copy of “How to Cook a Wolf” into the bottom of my bag with the notion that at some point it’ll sustain me on an overextended subway ride. I read “The Devil in the Kitchen” in the bathtub, A.J. Liebling over a lunchtime reuben, and good gosh a-mighty are my cookbooks covered in shmutz. 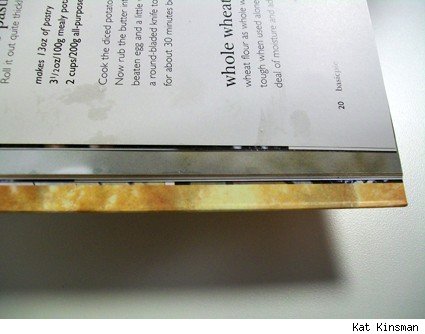 But hey, it’s thematic goo; “Molto Italiano” is spattered in tomato sauce, “Pie” — seen here — is all a-smear in lard, “Charleston Receipts” in Otranto Club Punch and “Staff Meals from Chanterelle” slicked with a fine mist of rendered rind bacon. To my mind, these books are being honored, used, proven. Should these books at some point have a subsequent owner, they’ll know what’s been tested, made and made again.

Still, am I dishonoring the object or the authors when I’m getting the books all mucky? I posed the question to Matthew Lee (whose book “The Lee Bros. Southern Cooking” I’ve doused in all manner of pickling brine), and he noted that he and his co-author, his brother Ted have debated pre-mucking-up copies of their book to nix the blank canvas factor. The recipes therein are warm of heart and humble of origin, so it’s not out of character, but would, say, a gellan-gumming of Grant Achatz’s “Alinea” be a crime against the rather expensive and exceptionally lovely object?

Do you keep your cookbooks in pristine condition, or do you just accept page stains as collateral damage?