“Meet Kinsman, who calls herself nervous. Labeled a “Nervous Nelly” since childhood due to a crippling case of anxiety, Kinsman is also the senior food and drinks editor of Extra Crispy, a wife, a daughter, and now, an author. In her first book, she lists her fears like groceries, providing the reader with a valuable understanding of what it’s like being terrified of, well, just about anything: talking on the phone; getting her hair cut (she actually trims her own at home); and going to the doctor, to name but a few. Kinsman opens up to the reader like a friend, explaining how talking about her illness was the only thing that helped her move forward, “even though it often felt like scraping off my skin with a butter knife.” With witty humor and an enduring boldness, Kinsman’s insightful read will have readers cringing at times, like when her nerves keep her from picking up a pair of designer shoes at the repair shop, but never fails to showcase her inner strength all the same.”—Carissa Chesanek, Booklist

“Kinsman, senior food and drinks editor for the Time, Inc. website Extra Crispy and founder of the mental-health awareness website Chefs with Issues, here chronicles a lifetime of worry and fear. She writes about her childhood and the crippling anxiety she felt but didn’t understand. Kinsman presents the various methods she tried to control her anxiety, including medications, meditation, supplements, etc., but never found a solution. The author comes to the realization that there is no one method that works for everyone, and many can’t manage the fear well, but that these emotions come from an illness and shouldn’t be a source of shame. Kinsman encourages those suffering from the malady to acknowledge what is happening so that they can get the support they deserve. VERDICT An insightful look at an often misunderstood disorder that doesn’t have an immediate cure, this book should appeal to anyone who has struggled with anxiety or loves someone who has.”—Library Journal: Terry Lamperski, Carnegie Lib. of Pittsburgh, PA 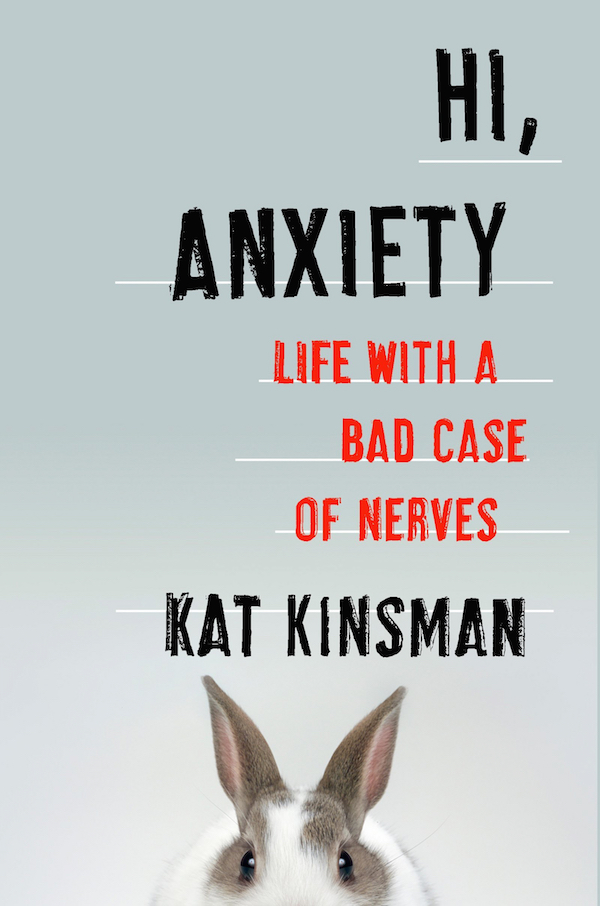 Joining the ranks of such acclaimed accounts as Manic, Brain on Fire, and Monkey Mind, a deeply personal, funny, and sometimes painful look at anxiety and its impact from writer and commentator Kat Kinsman.

Feeling anxious? Can’t sleep because your brain won’t stop recycling thoughts? Unable to make a decision because you’re too afraid you’ll make the wrong one? You’re not alone.

In Hi, Anxiety, beloved food writer, editor, and commentator Kat Kinsman expands on the high profile pieces she wrote for CNN.com about depression, and its wicked cousin, anxiety. Taking us back to her adolescence, when she was diagnosed with depression at fourteen, Kat speaks eloquently with pathos and humor about her skin picking, hand flapping, “nervousness” that made her the recipient of many a harsh taunt. With her mother also gripped by depression and health issues throughout her life, Kat came to live in a constant state of unease—that she would fail, that she would never find love . . . that she would end up just like her mother.

Now, as a successful media personality, Kat still battles anxiety every day. That anxiety manifests in strange, and deeply personal ways. But as she found when she started to write about her struggles, Kat is not alone in feeling like the simple act of leaving the house, or getting a haircut can be crippling. And though periodic medication, counseling, a successful career and a happy marriage have brought her relief, the illness, because that is what anxiety is, remains.

Exploring how millions are affected anxiety, Hi, Anxiety is a clarion call for everyone—but especially women—struggling with this condition. Though she is a strong advocate for seeking medical intervention, Kinsman implores those suffering to come out of the shadows—to talk about their battle openly and honestly. With humor, bravery, and writing that brings bestsellers like Lori Notaro and Jenny Lawson to mind, Hi, Anxiety tackles a difficult subject with amazing grace.

“CNN Eatocracy managing editor Kat Kinsman’s HI, ANXIETY, about how and why anxiety has come to be one of the principle defining aspects of contemporary women’s daily lives, partly arising from her recent autobiographical writings and television segments, to Carrie Thornton at Dey Street Books, by Scott Mendel at the Mendel Media Group (NA).”

So that’s happening on November 15, 2016. Here’s how it got started: Living with Anxiety, Searching for Joy and here’s the Facebook community I started so people dealing with anxiety can feel a little bit less alone: “Hi, Anxiety” on Facebook