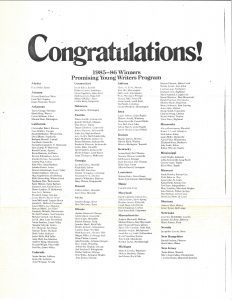 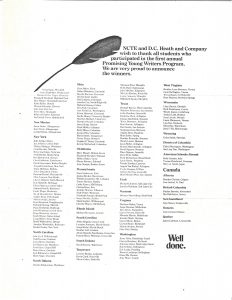 So I have this video series called No Pressure that I’ve been collaborating with some gloriously demented work colleagues on for a while now, and suddenly folks are picking up on it. Should you care to see more, that is entirely possible. Watch them here, or follow No Pressure on Facebook or subscribe to
No Pressure on YouTube.

NY Mag’s The Cut was kind enough to let me write about post-election anxiety,

These next few years are a long damned haul, and it’s hard to face that when you have an anxiety disorder. I do, and it’s knocked me flat from time to time over the past few weeks. I wake up in heart-knocking horror in the middle of the night, feel the sting of acid creeping up into my chest, or squirm at my desk with my back muscles twitching because I’ve been hunched down for hours, unconsciously waiting for impact. Several friends have ended up in the ER with panic attacks, convinced they were dying. They weren’t — just their hopes, dreams, and faith in the decency of their fellow man.

The worst happened. More will happen. All the magical thinking and proactive worrying in the world didn’t prevent the outcome of this election, and letting it attack me from the inside is not a viable solution, not if I want to spend the next few years anywhere other than under my increasingly pilling comforter. So I’ve come up with a coping plan. Maybe it’ll help you, too.

Read A Post-Election Action Plan for Anxious People at NYMag.com

Thanks to the glorious Maria Yagoda for her story “8 Things Someone with Anxiety Wants You to Know” on People.com

Like millions of Americans, writer and Extra Crispy editor Kat Kinsman suffers from anxiety. In the first chapter of her new book, Hi Anxiety: Life with a Bad Case of the Nerves, Kinsman recounts the moments in kindergarten when she first realized she was … “nervous.” When asked to read a passage in front of the class, she froze, biting her lips and losing control of her hands, which trembled against her will. For the rest of her life, Kinsman would be grappled with panic attacks, self-doubt, depression and the not-so-basic facets of being a human: Leaving the house. Maintaining relationships. Getting through crowds. Surviving the holidays.

Kinsman spoke with PEOPLE about what she wants people to know about anxiety, and the reality of living with it.

“You won’t necessarily see it in somebody. It’s not just like somebody sitting there acting nervous and biting their fingernails. If you’ve suffered from this your whole life, you know how to mask it. You can have somebody standing in front of you having a panic attack, and you might not know it. People wouldn’t necessarily ever think I was an anxious person until I told them. I was like, ‘No, I actually had a panic attack that lasted several hours yesterday.’”

Read the rest at People.com. 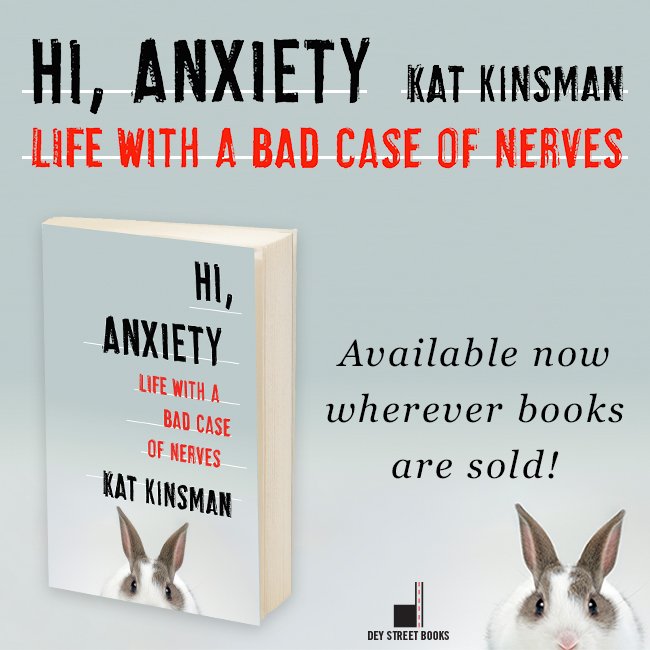 And I have a Harper Collins author page and book page, Goodreads page and an Amazon author page.

I’m thrilled that Hi, Anxiety has been included in several roundups of the best upcoming books:

Writer Kat Kinsman takes on a common condition in Hi, Anxiety: Life with a Bad Case of Nerves. Not only does she share poignant stories of her own experiences with the illness, she shows how millions are impacted. In doing so, she sets a powerful example of how we should all be working to end the stigma.

You may know Kat Kinsman from her work as an editor at Extra Crispy, or her work with Chefs With Issues. In Hi, Anxiety, Kinsman explores anxiety and depression through her own experiences with both, writing with candor about each has affected her everyday life.

Anyone who’s suffered from anxiety knows that it’s a particularly paradoxical disease, because as much as serious anxiety is no laughing matter, it’s also so sublimely absurd that it’s hard not to laugh at yourself. Kinsman bravely and brilliantly captures the difficulties of dealing with anxiety, using her sharp wit and lucid prose to take readers on a journey into the depths of an anxiety-riddled mind.

“Meet Kinsman, who calls herself nervous. Labeled a “Nervous Nelly” since childhood due to a crippling case of anxiety, Kinsman is also the senior food and drinks editor of Extra Crispy, a wife, a daughter, and now, an author. In her first book, she lists her fears like groceries, providing the reader with a valuable understanding of what it’s like being terrified of, well, just about anything: talking on the phone; getting her hair cut (she actually trims her own at home); and going to the doctor, to name but a few. Kinsman opens up to the reader like a friend, explaining how talking about her illness was the only thing that helped her move forward, “even though it often felt like scraping off my skin with a butter knife.” With witty humor and an enduring boldness, Kinsman’s insightful read will have readers cringing at times, like when her nerves keep her from picking up a pair of designer shoes at the repair shop, but never fails to showcase her inner strength all the same.”—Carissa Chesanek, Booklist

“Kinsman, senior food and drinks editor for the Time, Inc. website Extra Crispy and founder of the mental-health awareness website Chefs with Issues, here chronicles a lifetime of worry and fear. She writes about her childhood and the crippling anxiety she felt but didn’t understand. Kinsman presents the various methods she tried to control her anxiety, including medications, meditation, supplements, etc., but never found a solution. The author comes to the realization that there is no one method that works for everyone, and many can’t manage the fear well, but that these emotions come from an illness and shouldn’t be a source of shame. Kinsman encourages those suffering from the malady to acknowledge what is happening so that they can get the support they deserve. VERDICT An insightful look at an often misunderstood disorder that doesn’t have an immediate cure, this book should appeal to anyone who has struggled with anxiety or loves someone who has.”—Terry Lamperski, Carnegie Lib. of Pittsburgh, PA

An essay I published on Medium and which we republished on Yahoo Health and The Huffington Post:

Silent Night Is the Best We Can Hope For

I’m a 43-year-old teenager, sulking, silent in the passenger’s seat of my father’s Subaru, and he’s doing his level best to fill up the air—mostly by pointing out the local landmarks of Mauldin, South Carolina. There’s the corporate headquarters for Bi-Lo groceries in case I was wondering where all the trucks were coming from (I hadn’t noticed.), the Duke’s Mayonnaise plant, an intersection that’s tricky after dark, in case I was ever out this way again at night.

He’s trying to help and I love him for it, but I’m several clicks south of helpable at the moment and just trying to soldier through. That’s what decent people do. I suppose. I haven’t felt especially decent or much like a person since I landed yesterday. So I approximate what I hope is a neutral, perhaps even mildly pleasant expression and solder it onto my skull as we park the car and amble toward the low brick building with an armload of boxes. He’s limping noticeably and sports a massive, dusk-dark bruise on his forearm, exploding out from a pale, pinprick center. He’s tired, too, from the medication (“Better that than dead,” he says. “Yup,” I say.) but he’s still unmistakably my Pup.

There, just inside, is my mother—or at least what’s left of her. I never know quite what to expect from visit to visit. Parkinson’s Disease (which killed her brother a few years ago) and Lewy Body Dementia are an especially cruel roulette that way. In the two months since I’ve last seen her, they’ve knocked walking and swallowing solids out of play, replacing them with a full time wheelchair and a joyless slurry of pureed foods. But in a fit of whimsy, today they’ve given her back my name. It’s been years since I’ve heard it pass her lips. It comes out in a croak and knocks me off balance.
END_OF_DOCUMENT_TOKEN_TO_BE_REPLACED